Gamelearn organized a series of online roundtables in several languages at the end of 2020. In French, we were fortunate enough to have the director of the training programs for managers at Michelin, Julien Pelletier, and the head of technological change management at the Catholic University of Louvain, Thierry de Waha.

The central theme for the roundtable were the challenges of corporate training today. In Michelin’s case, Julien was clear about the first challenge for his company—to provide training that would make a long-lasting impact. With that in mind, the company has decided to offer training that allows for long-term behavioral change and covers employees all around the world. A second challenge has been to conquer the digital realm and to do so competitively.

According to Thierry de Waha, The Catholic University of Louvain also has a problem with training dispersed staff members, although not as much as Michelin, as professors, researchers, and administrative staff are mostly in Belgium. Another issue for Louvain Catholic University is the lack of time for staff to dedicate to training and for the university to meet their training goals. Due to this, they are developing learning pathways, such as for managers, which is similar to what Michelin is doing.

Lastly, Thierry explains that at Louvain Catholic University all the training they offer is voluntary, which is another challenge in itself.

In Michelin, where training has always been compulsory, they are now starting to propose the combination of the push and pull approaches, that is, compulsory and optional training. Once again, a similar challenge to respond to. 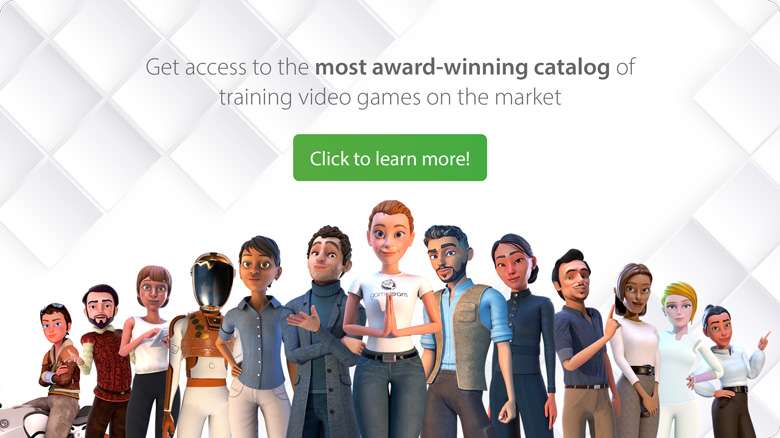 Getting started with game-based learning

Michelin started using serious games for corporate training at its headquarters in Spain. The success of a local training project sparked the rest of the company’s interest and many of their offices ended up embracing it as well. One of the decisive factors in this was the surprising level of involvement they observed in the Spanish employees.

“We all know that traditional e-learning is weak in terms of motivation. What interested us about simulators in the form of video games is that the user can become the protagonist and make decisions and evolve in a safe scenario. In addition, you retain what you learn better”, explains Julien Pelletier.

Louvain Catholic University had already adopted innovative techniques, such as gamification, in teaching its nearly 32,000 students. That was what led them to take an interest in making similar techniques available to their employees for corporate training.

In search of that innovation for their staff’s training, they first tried creating a serious game of their own, which was a considerable effort. Then, almost by chance, they encountered Gamelearn’s training video games. They soon started to appreciate their potential to respond to important training needs.

“On top of all that, we could cover most of the topics that until then we were only developing in person”, says Thierry de Waha.

It was then that Thierry’s department was able to compare the effectiveness of both methodologies. They confirmed that online courses in the form of video games increased knowledge retention more than face-to-face training. The challenge, in their case, was maintaining socialization in a virtual environment. The online platform has played a vital role in this regard, as it’s made communication and interaction with users easier, both automatically and manually.

In line with this idea, Julien confirms what influences the success of social learning—access to serious games in classes or groups, so that learners can take advantage of the competition element of gamification, such as rankings, without the need for a multiplayer game.

Because of the distancing and confinement measures taken throughout 2020 due to the global pandemic, it’s clear that e-learning platforms have functioned as lifeguards to keep corporate training afloat in organizations.

Michelin and Louvain Catholic University have been no different in this regard, and both turned to digitization to adapt to the “new normal”, providing the expected support to their respective employees. In each case, Gamelearn’s training video games have enabled them to address this demand for virtual training as quickly as they intended, and their experience adds a new endorsement for video game-based training within organizations.

If you also want to see how game-based learning can help your corporate training, contact us. We’ll tell you just how easy it is to access the Gamelearn platform and its complete catalog of serious games. And if you’re interested in the online roundtable recording in French, you can watch it here.

Gamelearn Experience 2021: a virtual trip around the latest features of the most awarded game-based learning platform

Expectations vs. Reality: The Corporate Training your Clients Want in 2021

The best serious games for corporate training of 2020