The concept of “storytelling” has taken on somewhat of a new meaning in recent memory, especially seeing how it’s so important in the worlds of marketing and advertising. Even so, it still describes one of the most inherent parts of humanity: our love of telling and listening to stories. Stories are one of the most powerful ways to communicate information and messages and do so in a way that captivates and inspires our audience. Storytelling aims to hook the listener in, even let them participate when possible.

When applying this basic idea to the area of corporate training, its usefulness is apparent: we can convey training content in a more engaging way if we use the story as a driving force. But the crux is how exactly do we create a story that grabs our audience, especially when our goals require us to keep the essence of the original training content intact?

Pixar’s 22 Rules of Storytelling are a great glimpse into how creators construct their ideas at the massively successful animation studio. The main idea behind these rules touches on what we mentioned above. Filmmaker Andrew Stanton, who worked on some of the company’s most noteworthy films, Toy Story and Wall-E, stated in his TED talk that “storytelling is joke-telling. It’s knowing your punchline, your ending, knowing that everything you’re saying, from the first sentence to the last, is leading to a singular goal, and ideally confirming some truth that deepens our understandings of who we are as human beings.” 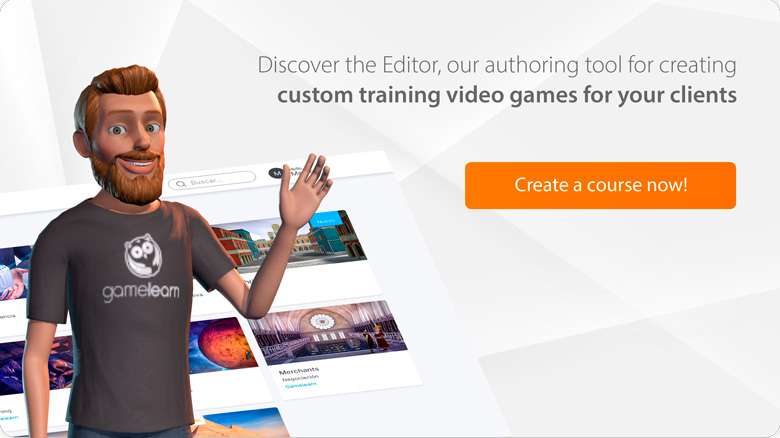 The transcendence and power of stories in our own humanity are undeniable, so what’s stopping you from harnessing them and integrating them into the way you communicate and transmit information? Corporate training is undoubtedly one of the areas we can apply it to. There is already a number of digital tools out there designed to help creators with the creative process. Below are some of the tools that caught our eye, especially in the context of creating e-learning courses and utilizing game-based learning.

Created in 2009, Twine is an open-source program widely used by video game designers because it helps them create interactive, nonlinear stories — as is popular in that format.

Anyone who’s interested can familiarize themselves with the software and find loads of help on how to use it on their Wiki. Dan Cox’s blog series Gamasutra is also a great place to delve into all the possibilities this program has to offer.

Although intended for writers, Storyist is an application that can make it more manageable for any instructional designer to create stories to serve as a backdrop to their content.

Staying in the vein of tools that are designed for writers or editors but that can also help organize ideas, we have Airstory. Its features include easy, organized storage and the ability to turn texts and images into cards.

This application can be used to easily structure plot points. It also offers templates with common story structures so you can pick and choose the ones that fit your needs.

On their website, Campfire boasts that the tool helps writers “imagine, plan, and tell their stories.” That slogan alone justifies checking out how it works. They also generate their own content, like their blog, which discusses their product and everything else that goes into story creation.

These are two complementary tools offered by the same company. The first one, Scapple, is for organizing ideas and designing the story’s flow in the early stages, and the second, Scrivener, focuses more on the act of writing, managing, and editing texts.

Those who work in the audiovisual world, which also leans heavily on storytelling, know how important a tool storyboards are. Boords makes creating them much easier by supplying simple, powerful drawing tools that bring the story to life.

Like the previous tool, Storyboarder makes it easier to conceptualize your story. It allows you to quickly sketch the story or plot point to get an idea if it works or not.

Another crucial thing for storytellers to do is to hammer out their storyline, and this tool is great for that. It helps them visualize and grasp the situations and emotions that the characters can go through at any moment. It lets you add characters, scenes, and notes to the story and construct it in a gradual and intuitive way.

As the website states, the goal of this program is to make it easier for creators to organize their plot points and oversee their character development through creating outlines. If you’re interested, you can get a sneak preview of how the app works by entering a hypothetical title for your story on the homepage.

Have you already chosen a story for your next online course?

This is just a small sample of the wide variety of tools available for instructional designers to use in the creative process. The tools are out there to make your courses more engaging and fun, and, now, there are myriad ways to avoid writer’s block, so no excuses!  This is especially true if you make video game courses, which are now readily available thanks to authoring tools like The Editor from Gamelearn.