This past March 4, Gamelearn organized an interactive online event to present some of the highlights from its recent report Contradictions of Corporate Training 2021, and it did so in an exciting, fresh way — as a video game. The event consisted of three separate sessions (one each in language: English, French, and Spanish), and attendees actively participated in helping progress the story and uncover more information.

The video game began in outer space, with a scene featuring delegates from the galactic assembly at the Organization of Galactic Unity (OGU) discussing the possibility of admitting Earth as a member planet. It’s decided that, in order for the earthlings to prove their worth, they must show that their training methods have evolved to a satisfactory level. To do this, the OGU sends two undercover agents down to earth to investigate. After several years, the OGU agents lose contact with the mothership and, faced with the likely possibility of never returning home, start implementing and spreading the most innovative and effective training methodology out there: game-based learning.

That’s the gist of the video game featured in Learning Wars 2021, which was attended by almost 300 people from all over the world in all three languages. The event also looked at the broad strokes of the report that Gamelearn released a week prior. The report revealed significant discrepancies between the type of training employees expect from their companies and what their HR departments are offering them.

For example, the online formats that are most used by companies in their digital training efforts are generally archaic and antiquated when compared to what their staff demand: VR, AR, and video games. HR professionals themselves widely admitted in the report that they were aware of the fact that the e-learning methods they offer should be more interactive and/or include real-life simulations and personalized feedback.

Even though the Learning Wars 2021 online experience came to an end, the conflicts presented in the story were never really resolved. The battle for effective and innovative e-learning rages on in every organization, and in every team responsible for workforce training. Clearly, HR departments have their work cut out for them if they want to deliver on what their staff wants.

However, as the data presented in Contradictions of Corporate Training 2021 shows, the winds have shifted in corporate training towards one format in particular in order to engage, attract, and educate employees. Which format is that? Video games themselves. This was one of the most requested formats by employees surveyed in the report, and it has been lauded for its potential scalability and ability to help companies save key resources. It’s also one of the most cost-effective ways to go about training in the long run, beating out other highly sought-after methodologies such as AR or VR in terms of price.

If you’d like more information about the survey, which was conducted by interviewing 1,500 HR professionals and employees from various sectors around the world, download our free report. In it, you can learn more about some of the main contradictions in the current landscape of corporate training as well as see where some of the biggest trends are forming right now. 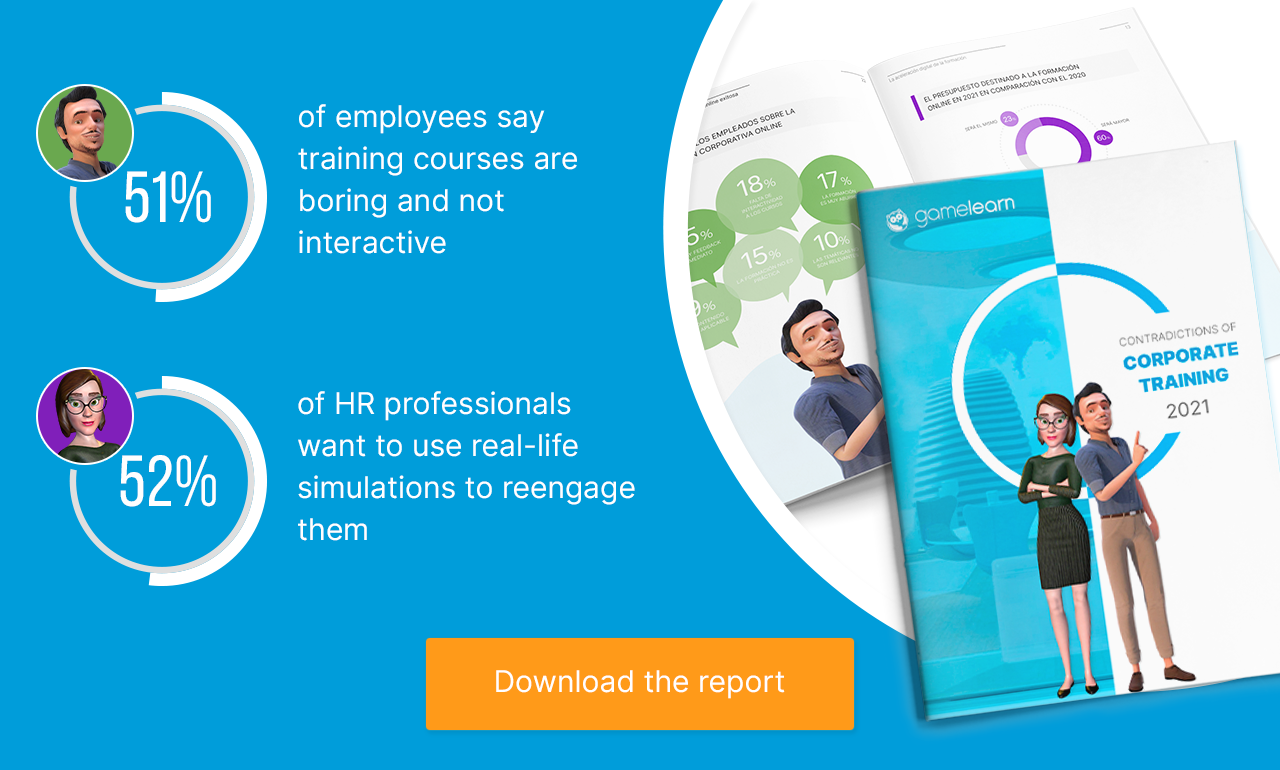